The peristyle garden was the visual nexus of the house, a link between the public and private. It ended the public fauces-atrium—tablinium axis and marked the beginning of the private areas, surrounded as it was by dining and reception rooms open to the master’s guests.

But even in these private zones used visual displays to emphasize the standing of the owner. For diners in the summertriclinium, the focal point of the view was the ancestral shrine, framed once again by columns. By highlighting the shrine in this way, the master of the house was reminding his guests of his long and illustrious pedigree. For even friends needed reminding of their place within the social hierarchy.

These features, usually found in temples or public basilicas were deliberately placed at key points on the visual axis. Casual passersby in the street, as well as clients waiting in the atrium would be left in no doubt as to the importance of the owner.

Features commonly found in public architecture such as temples and public basilicas were used throughout the house to mark entrances and key views. Through these features placement, both clients and passers—by, expressing to the public the importance of the owner, could see them.
- Entrance: framed with tufa Corinthian columns
- Tabularium: engaged columns were added at the entrance 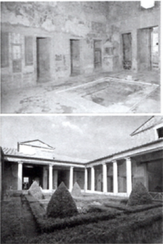 The Atrium
- Built in Tuscan style, the Atrium contains a marble impluvium, temple style lararium
- Dedicated to the worship of the lares and paintings in fourth style.

Peristyle
- The large columns in the peristyle at the House of Menander are representative of the Doric style of architecture.
- The enclosed grader within the Peristyle held a fountain pool and area used as a summer triclinium

Bath Area
- The bath area was host to a four columned courtyards, change room and Caldarium (warm
room) in which a mosaic depicts sea creatures.

The decor of the house was of superior execution. The main areas of the house were decorated in the latest, fourth style frescos. The themes of this decoration varied across the house.

In the atrium were scenes from the Nile while in the wing to the east, various episodes from the Trojan War were portrayed. In the garden rooms, the theme was poetical and theatrical, in keeping with the function of entertaining. One of the poets portrayed, Menander, was used to name the house by its modern excavators.

Main areas of the house decorated in the latest, fourth style frescos.
The themes of these decorations varied across the house;
Atrium — Scenes from the Nile
Wing east of Atrium — Various episodes from the Trojan War
Garden Rooms — Poetic and theatrical theme.

History of the House of Menander

- Excavated and restored by Amedeo Maiuri 1927 — 1932
- The house of Menander gained its modern name from the fresco of ancient Greek Dramatist Menander, found in a niche in the Peristyle. The bold yellow and red colouring of the painting indicates the owner’s wealth.
- The house began life in the third century BC as a basic atrium house. In the second century BC, the back horzus or garden was replaced by a newly fashionable Hellenized feature, the central peristyle.
- By the first century AD, the house was at its peak. A seal in the servant’s quarters suggests it was owned by Quintus Poppaeus, a relative of the Empress Poppaea. A bath house was added, as well as an entertainment suite and a stable yard and servant’s quarters to the south east of the house.
- At the time of the eruption of 79AD, the house was being redecorated. Its valuable silverware was packed away and only a skeleton staff was in residence to oversee the work.

Other Areas of the Syllabus the House of Menander Provides Evidence For...

This was because by 79AD, space around the forum, the center of business in Pompeii was at a premium. This prompted a movement outwards towards the city limits where space was readily available. The owner of the House of Menander in all probability maximized on this movement of trade. His house already dominated its insula spatially. It is likely he also rented out local properties that he had acquired to his clients.

The location of the house also emphasizes the importance of business to the owner. Fullers, carpenters and weavers surrounded the area. Despite being on the periphery of town, well away from the forum, the area was a hive of industry and trade.
Powered by