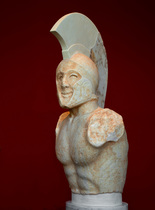 Statue of hoplitodromus (Running hoplite)
- Known as Leonidas, the Spartan King who led the 300 to a fight to the death at Thermopylae to delay the Persian invasion in 480BC
- Statue is smiling indicating not only pride in Sparta and being a part of the Spartan army, but also reflects the Spartan ideals of courage and being fearless in the face of death
- Armoured with a helmet with a plume and a breast/back plate
- The muscle tone is a reflection on the Spartan physical ideals 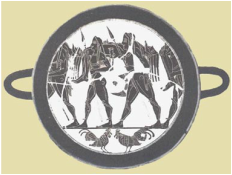 Laconian Cup
- Depicting two soldiers carrying a fallen comrade on their shoulders (6th c. BC)
- Demonstrates a lack of fear of death typical throughout Greece
- Highlights the belief that death in battle is the most honourable death
- Spears are held by the soldiers, suggesting they're hoplites
- The length of the hair indicates their pride in their position and the state of war they're in 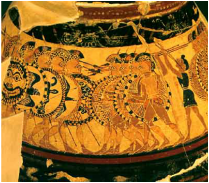 Corinthian Vase
- Two groups of hoplites fighting in phalanx formation c. 640 BC
- From Corinth (Outside Sparta, within Greece)
- Helot horn blower in the background
- Evidence of constant training and unity in the army 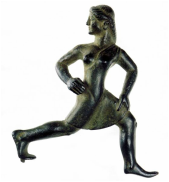 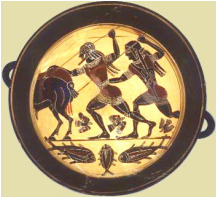 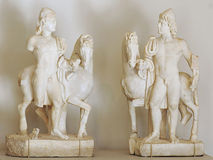 Votive Reliefs Depicting the Dioscuri
- Idealised physique; muscular and fit
- Related to Sparta's origin, believed to have been Spartan princes who shared their immortality
- Reflect's Sparta's ideals of being expert horseman and spearmen among other discipline

The Menelaion
Purpose – Votive offerings to Helen, place of worship. Dedicated to Helen and Menelaus
Structure – In the shrine's earliest form, there may not have been a structure at all. In the late 7th century, a monumental structure was constructed at the site of the shrine. The temple was built on a mound, had a square step pyramidal structure in style of hero shrine and stood eight meters tall.
Key features – Triangular. Built on a mound. Backdrop of mountain range
Decorations – Votive offerings and pottery. Parapet (a barrier which is an extension of the wall at the edge of a roof, terrace, balcony, walkway or other structure.) faced with blue limestone and white marble
Evidence – Pottery fragments show that there was continuous settlement here in the late 16th and 15th centuries. A rich deposit of offerings from the late 8th and early 7th century were found NE of the later shrine. Number of votive offerings unearthed à one bronze statuette has been called ‘Lady of the Menelaion’ representing Helen

The Amyklaion
Purpose – Worship and sanctuary. Dedicated to Apollo and Hyakinthos. Location of festival of Hyakinthia.
Structure – Circular alter. Throne atop the temple. Shrine dedicated to Apollo à excavations reveal base of throne and retaining wall. Designed in Ionic style, consisting of slender and intricate spirals mimicking Egyptian architecture. Had a smaller base with a more circular profile that was often more ornate than the Doric style.
Key features – Circular alter, bronze statue of Apollo
Decorations – Votives, statue of Apollo. Carvings show lotus flowers and other sculptures.
Evidence – Figures and figurines. Remains found located on the hill of Agia Kyriaki, . Coins with a likeness of the statue of Apollo found on the site

5.3 Writing and literature: Alcman and Tyrtaeus

Literacy in Sparta
Evidence
- Sacrificial meat hook with a dedication: “to Helen”
- Ovoid Aryballos inscribed with the words “To Helen, wife of Menelaos”
- Epigraphic evidence – suggests kings, ephors, commanders and members of the Gerosia were literate
- Stone inscriptions – periokoi stonemasons may have been literate (Cartledge)
- Aristophanes mentions a Spartan poetess in his writings

Spartan Literature
- Most ancient written sources on Sparta were not written by Spartans
- The period in which Sparta held significant power in the Greek world provides us with our only surviving literary sources:
- Fragments of poetry by Alcman
- Few whole poems by Tyrtaeus

Alcman
- Alcman lived and worked in Sparta around the end of the 7th century BC following the 2nd Messenian War
- Clues in his poems suggest that he might have come from Sardis, the capital of the kingdom known as Lydia in Asia Minor
- His poetry reflects a cultured prosperous society that was open to foreign influences

Alcman’s Poetry – Davies
- Sparta was not yet the military state it later became but a home of music and poetry
- Spartan literature began in the 7th century
- It’s from Sparta that w have our earliest substantial fragments of choral lyric, which are the work of Alcman
- Longest fragment consists of about 100 lines, complete or partial of his Parthenion or Maiden song
- Seems to have been sung by a choir of girls at a religious festival before dawn, competing in music and beauty with another choir
- Contains brilliant imagery, simplicity and melodic beauty. This conveys the grace and gaiety of an archaic world

Tyrtaeus
- Strabo and other writers have preserved approximately 12 fragments, including at least three complete poems, in books
- They were written to praise the Spartan constitution and to encourage heroism in Spartiates
- Historians date most of Tyrtaeus’ poems to around c. 650 BC

Tyrtaeus – Darlington
- c. Middle of a 7th century BC, Tyrtaeus wrote poetry that encouraged the Spartans to fight bravely during the 2nd Messenian War
- Apart from fragments, four of Tyrtaes’ elegies (song to lament and honour the dead) have survived
- Who he really is remains a mystery
- Ancient Greek stories describe him as a poet sent by Athens to help the Spartans, a lame schoolmaster

Tyrtaeus was another important Spartan poet. His poetry was full of martial spirit. Find out some information about his life and works. Why was his poetry significant?
Tyrtaeus’ poetry describes much of the Spartan’s military practices and armour that provides evidence for other aspects of Sparta’s history. In addition to this, he provides an insight into the Spartan military values and social attitudes.