4.2 Myths and legends: Lycurgus and the Dioscuri

Lycurgus
Lycurgus is generally considered a man of myth; a lawgiver who brought about Sparta’s unique system of government and created the order and Eunomia that lead to their great prosperity. He also modified the Spartan’s beliefs about death, making it more commonplace and less to be feared, which made for better soldiers who were unafraid of their fallen comrades on the battlefield.

Dioscuri
They believed that the twins were Spartan princes, one the son of Zeus (as their sister Helen) and one the son of Tyndareus, shared the one’s immortality, as neither wanted the other to die. They then believe the twins joined the stars and became the Gemini. The Spartans however, believe that the twins still live close to Sparta and assist the city in times of danger. 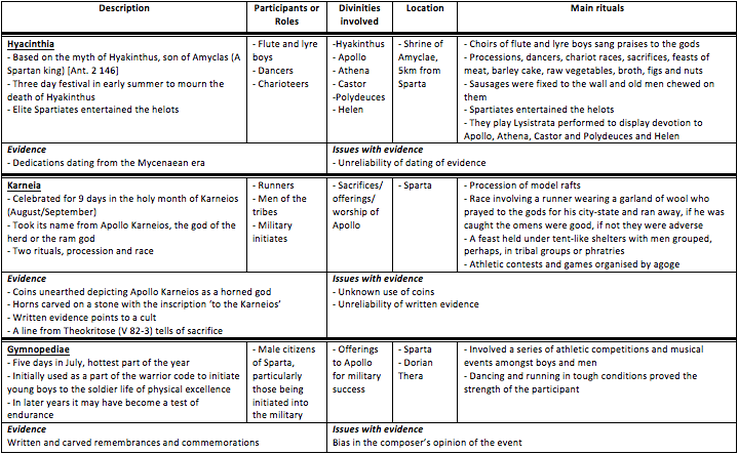 4.4 Religious role of the kings

- Carried out sacrifices
- To respective patron gods Zeus Uranios and Zeus Lacedaemon
- On behalf of the people of the city on 1st and 7th day of month in Temple of Apollo and Temple of Athena
- At important annual festivals; At funerals
- Prior to leaving for war (Zeus); Before crossing frontier (Zeus and Athena)
- And at dawn on day of battle when she-goat sacrificed to seek omens
- Appointed 4 pithoi or sacred envoys to Delphic oracle and responsible for safekeeping of all prophecies
- Regarded as intermediaries between gods and men


Funeral and Burial of Kings
- No archaeological evidence for royal burial but we know that kings given elaborate funerals and special burial rites that reflected semiadivine status.
- Plutarch tells us that Spartans did this because they treated kings ‘not as mere men, but as heroes’.
- Herodotus notes the following
- Horse riders took news of king’s death all over Lakonia
- Women beat cauldrons as signal for people, one man and one woman from each  household to put on special mourning clothes;
Heavy fines for noncompliance
- People from all over Lakonia compelled to attend funeral
- Crowd of mourners at funeral included Spartiates and perioeci
- Communal displays of public grief: men and women struck foreheads, wailing and praise of deceased king as ‘best ever’
- If king killed in war, statue made of him and carried to burial on bier
- 10 day mourning period during no public meetings or elections

Death and Burial in Sparta
- Often ancient Greeks fearful of dead believing daimones or spirits hovered near bodies of dead and around places of burial. Body usually cremated on funeral pyre and later bones collected and buried with ceremony.
- Spartans different from other Greeks in aspects of funerary practices. Plutarch tells us that Spartans believed that these regulations instituted by Lycurgus
- “allowing them to bury bodies in the city itself .. not be disturbed by them nor dread death”
- Not permitted to inscribe name of dead person on tomb unless “it was a man who died in war, or a woman who died in sacred
office”)
- Sacred office could refer to childbirth as many wrongly translate
- BUT Brule and Pilolot believe it is a mistranslation and could be  interpreted in a number of other ways such as religious
duties: duties as  priestess. Also supported by Figueira
- Kings buried outside city because thought safer if spirit of dead king removed from  close association with living

Spartan Burials
Contracted Body with Stone ‘Pillow’ Burials before 900BC.
- Earliest known burials found in Limnai quarter of Sparta. These 4 burials placed on bedrock dated by Protogeometric pottery fragments found in soil above them. Pottery produced in 10th cent (900) and thus burials cant be later than that although could be made anytime before
- Complete skeletons found in contracted position, like fotus, w/ stone for ‘pillow’ and others carefully placed following curve of spin. Other disarticulated bones from secondary reburials on site suggest area use as cemetery.

Four Graves in Mesoa Quarter of Sparta about 600BC.
- 1964: Christou discovered 4 cist graves (lined cavities in ground) at Mesoa within  Sparta. Contained remains of 2 adult males, one female adult and one child --> Christou and Cartledge made arguments for interpreting these burials within Sparta itself as being of Spartan citizens
- Grave marked by late 7th cent relief amphora depicting both hunting and battle scene..
- Burials covered by tumulus (earth mound) and earth when excavated produced bones  of oxen, wild boars and horses sacrificed at time of burials. Oxen and boars would have  been eaten as part of funeral meal

Two Storey Tombs, early 6th cent – 2nd cent
- Ossuary: special burial where bones stored
- Monumental tomb of 2 distinct stories distinctive feature of Spartan burial practices in  late archaic and classical periods (6th and 5th cent). Such tombs continued to be erected through to Hellenistic period (3rd – 2nd cent)
- These are types of tombs Pausanias would have seen as traveller. Notes many  monuments to heroes that crowd number of areas in Sparta. Primary burial in structure was made in lower story.
- After body decayed bones collected together with old offerings made to deceased and  relocated to 2nd story
- One hillside tomb of this king dating from early 6th cent has been interpreted by  Raftopoulou as site of some form of worship, possibly hero cult.
- 22 complete Lakonian vessels were ritually deposited at site and have been  interpreted by her as pottery dinner served used at funerary banquet celebrated in honour of deaed. Vessels specially dedicated because they were all cancelled by having hole pierced in bases so couldn’t be used again

Tombs and Cenotaphs at Sparta.
- Tomb was soldier’s reward for valor in battle
- Highest honour and ideal of soldiers death linked to promise of type of immorality as  lived in memory of the people
- Known from Pausanias’ description of Sparta that by 2nd cent AD, Sparta packed with  tombs and cenotaphs (grave memorials without body) of city state’s battle heroes.
- Cenotaph of 5th cent Spartan general Brasidas died in Peloponnesian War against  Athens and buried Amphipolis
- Bones of King Leonidas, who fell at Battle of Thermopylai fighting against Persians in  480BC brought back to Sparta by nephew Pausanis 40 years after battle
- Pausanias tells us that every year Spartans made speeches over them and held  funerary games in which all Spartans could enter. Also stone nearby inscribed with names of men who fought and died at Thermopylai, the famous ‘300 Spartans’ and their fathers’ names
- Tyrtaios specifies known tomb as soldier’s reward: “his fame and good name will never perish utterly for he is immortal in the grave”
Powered by